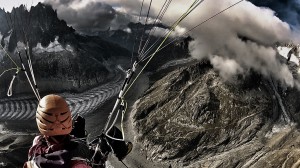 This web page will be dedicated to your testimonies (between 3000 & 6000 characters) on the intimate relationship between climat change and mountains (impacts, and interests in mountaineering values to fight against climate change.) Whether you are a scientist, a hiker, a shepherd, a mountain guide, a ski resort employee or a local political figure, it’s of little importance, as long as your connection to the mountain has already enabled you to witness global climat change and given you a chance to position yourself on the issue.

Here you can share with us your public speakings, writings of your own mountaineering experiences, simples anecdotes, or any greater considerations on the the role of mountain and alpinism in the public debate around finding cohesive and supportive solutions for a sustainable world.

On the picture above, pilot Liv Sansoz soars above the disappearing glacier « Mer de Glace ».

“So, I declare enemy of nature whoever judges the high mountains unworthy of lengthy contemplation. Surely the upper parts of the highest peaks seem to be above ordinary inflictions, even weatherproof as if part of another world. Up there, the impacts of the almighty sun aren’t the same, any more than that of air and wind. There, snow is eternal, and this extremely soft material which melts under the pressure of a finger does not care nor from the sun, nor of its burning fires (…). Who could ever hope do the precise inventory of all animal species and high pastures’ wild animals we come across in the mountains? All that nature produces here and there and sparingly, is shown in the mountains, given in abundance and in full, as it itself displays all of its ressources, all of its jewels.
We find ourselves in the mountains, admiring in great degree, all the elements and the diversity of nature. We could consider it the “great burden of the earth,” as if nature was showing its force by lifting sush heavy weight, which itself is pushing down with such determination. From there gushes plentiful water sufficient enough to water the entire planet. ”

Letter from Conrad Gesner to Jacques Vogel, “On mountain contemplation”, 1541 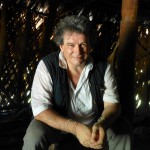 Geographer and mountaineer, in 1985 Eric Julien lived an unexpected and life-changing experience. As he was trying to reach the snowy peaks of the Sierra Nevada de Santa Marta(Colombia) the highest coastal-mountain in the world, he was saved from a pulmonary edema by the Kogi Indians. Since that day, as a way to thank them, he has been helping them buy back their ancestral land, to enable them to continue to live as indians on Indian territory. Simultaneously, Eric Julien has been helping executives and business leaders teaching them radically new management values inspired by the Kogi culture: cooperation, collective intelligence, respect and integration of life principles, rebuilding human-nature relationship, non-violent conflict resolution and relationship to time, materials and space … The Kogi Indians, regarded by other Amerindian themselves as highly spiritual people, are the first to witness – and also amongst the first to suffer from – the great upheavals of nature, whose fall of biodiversity and climate change are the most palpable signs. For them, the Sierra, which contains nearly every climate of the earth in just a few hundred square kilometers, is like a local representation of the World. Imbalances seen at a local level today will occur on a global scale tomorrow. This population of mountaineers has been warning us for decades on the urgency to change our behavior and give greater meaning to our actions. In the ‘Summit(s) for the Climate’ project, Eric Julien establishes the connection between these precious Kogi Indians’ testimonies and the urgency with which we need to [re]appropriate the values they share with us, for the sake of their survival, as well as our own!